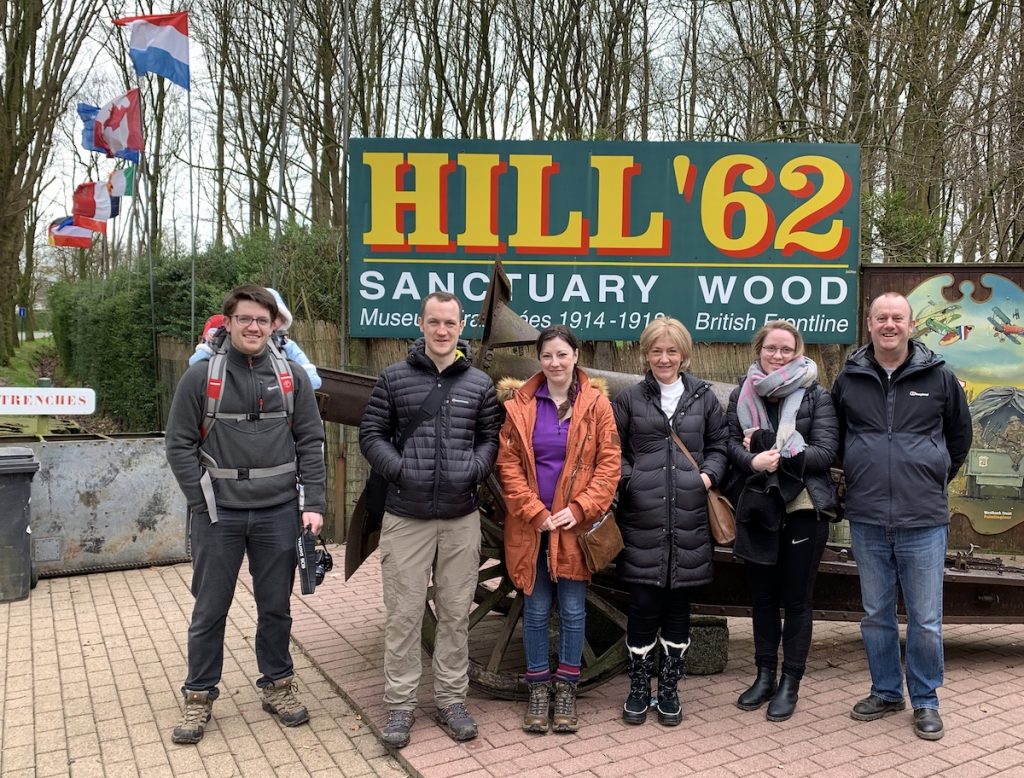 For years I’ve been threatening to go on a tour of the battlefields of 1914-18. My wife Pam, secretly sorted this for my 60th birthday and how glad I am that she not only did this but found Jon to take us and the whole family. Pam furnished Jon with a little background information from which he had clearly conducted further research. For John Lloyd, he was able to show us the places John moved through with the 6th, plus likely haunts that John may well have frequented. Eventually we visited Maple Copse, where Jon pointed out John Lloyd’s routes in and out of the line on the night he was badly wounded. Jon produced a bottle of whiskey from which we all toasted the efforts of John and his mates which was a nice touch. For George, he had identified the likely cause of George’s death with pictures of the crater from the offending shell, and where it all happened. At Solferino Farm Cemetery he took us to George’s grave, where after we had paid our respects, Jon recited the ode of remembrance from the Fallen Poem by Laurence Binyon. The main reasons for the visit having been covered, Jon (and Rick, our driver) continued to give us a wonderful tour taking in many other locations. At each there was always a story to tell, with Jon having photos to give more substance to the tale. He and Rick are clearly immensely passionate about the history of the sacrifices made by the many and are extremely knowledgeable with nothing was too much trouble for them.

All in all, a brilliant trip and highly recommended. I just wish we had gone with him years ago.

To the grave of my Grandad, George Williams. 1st Battalion Kings Own Yorkshire Light Infantry 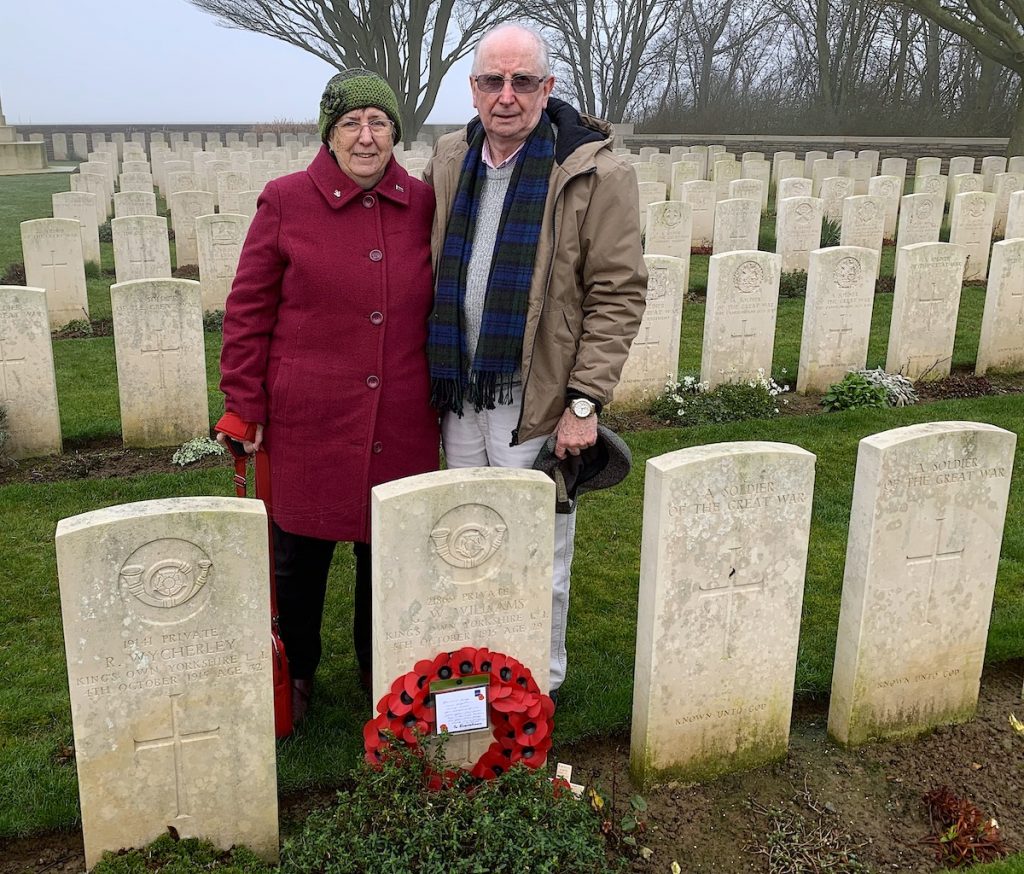 Killed in action at the Battle of Loos 4 October 1915. Buried at Arras Road Cemetery. Roclincourt.
Both my wife and myself would like to thank you very much for the great tour you gave us regarding my grandfathers field of battle from WW1. Your amount of information seemed to be endless, every time we asked a question the answer was forth coming. Although it was a very cold day with visibility down to less than a few hundred meters at times, my wife and I felt very safe during the guided tour. All our requests were met and at the end of a cold damp day, I had at last found my grandfathers grave and been informed of his last movements during those terrible times he spent on the Western Front.
Thanks Jon for a great day.
Roger & Barbara Williams
Australia
January 2020

A tour of the Somme Battlefields and to Mametz Wood 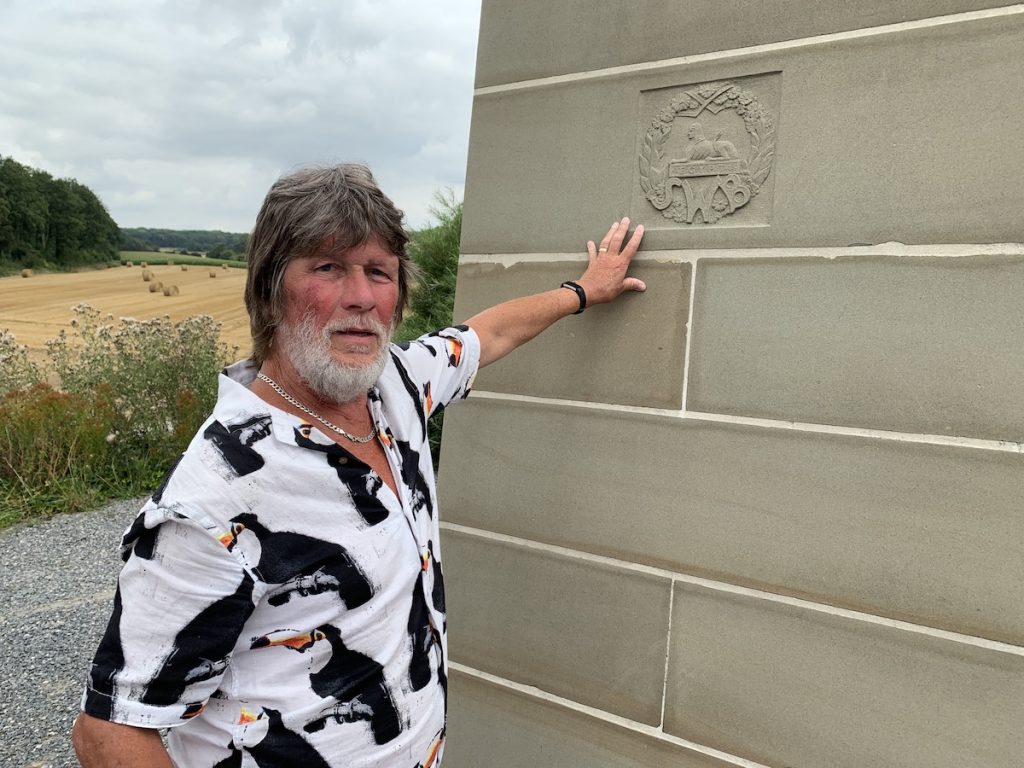 I always wanted to go to Mametz Wood to see where the South Wales Borderers had been in action. We also saw Flatiron Copse Cemetery and the grave of Ernest Dwyer VC. It was a brilliant three-day tour. Jon Nicholls has a fantastic knowledge of the Somme Battlefields and made it all come to life with his stories of the gallant deeds which happened here.

Also most importantly, he knows where the Pubs are!
Andy Whelan
Hemel Hempstead
August 2019

A Canadian Tour of the Somme & Arras 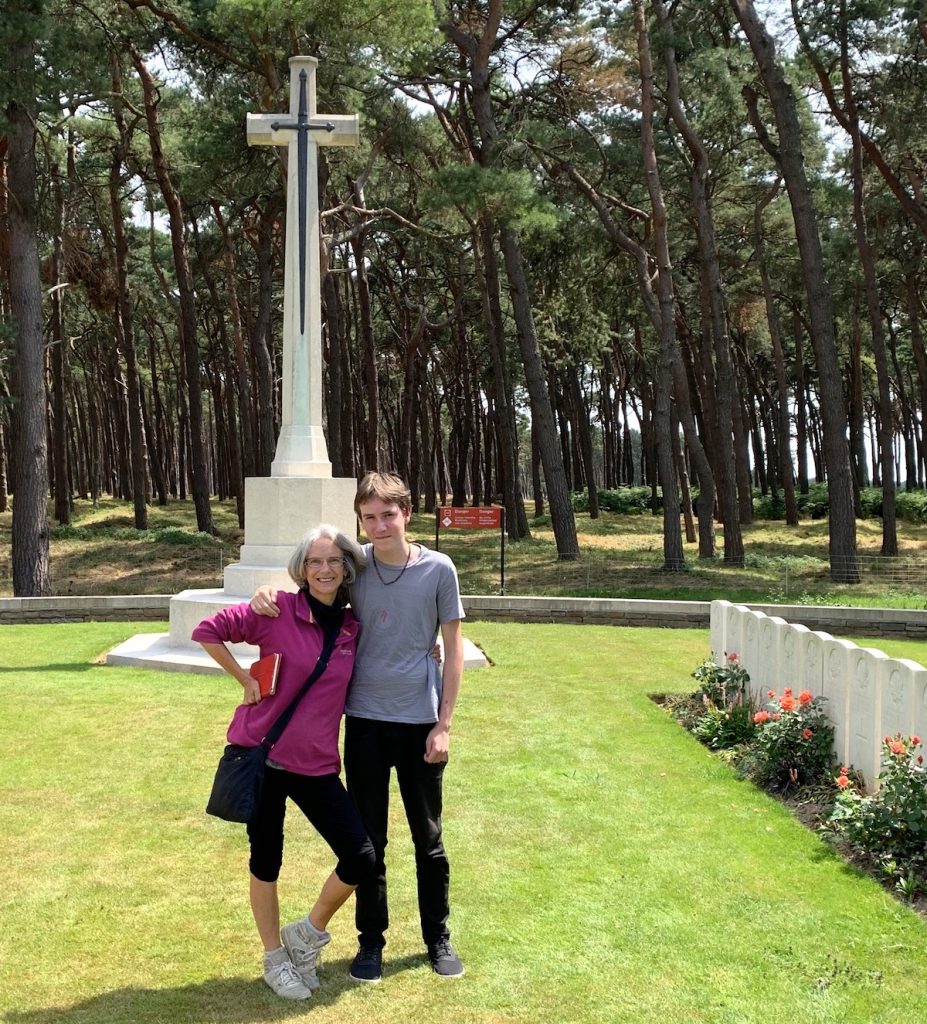 We have just returned from a most extraordinary trip with Jon. My 15-year-old nephew from Canada wanted to visit Vimy Ridge. Could this be arranged? Of course! Any other Canadian sites? Of course! The Somme? Definitely! So we found ourselves on exactly the kind of tailor-made tour that we needed: the main Canadian sites, the Somme, the Arras Tunnels, and a pleasant stay in the pretty town of Arras. Jon was wonderful with my nephew, not just talking about the sites and the history, but also about music and anything else they might have in common.

The car was comfortable and relaxing, which also made the trip easy for us.
Highly recommended.
Margaret Cheetham from Dorset with Kai Merriam from British Colombia.
July 2019

In the footsteps of Raphael Croux. A French Army Soldier and Great Uncle. 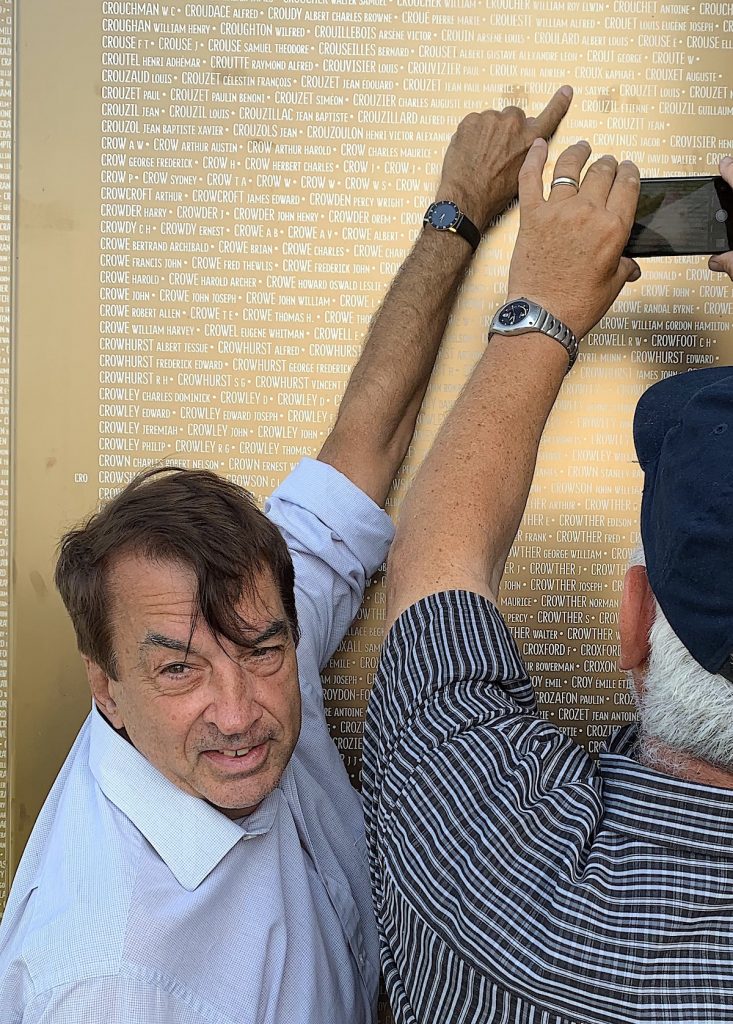 I just wanted to thank you again for one of the most memorable events In my life. I very much enjoyed your informative guidance through the memorials and battlefields. As you know, my American father served in France during WWII and met my mother, a French citizen, there. Her father, my grandfather, was wounded in 1915 just north of Arras during the First World War. His twin brother was killed by artillery in the same battle. He had no wife or children to help keep his memory alive. There was no identifiable body and no tombstone. In the 1990’s no one in my mother’s family even knew his name. He gave his life for France, yet it was like he never existed or was even born. Through a friend in Paris, I was able to find his name. Yet with no tombstone or marker, there was nothing to indicate the ultimate sacrifice that he gave for his country.

Your confidence that we would find his name at the Memorial of Notre Dame de Lorette was met with success. You helped bring a fallen veteran from complete anonymity to his rightful place in the memory of his family. For this I will be forever grateful.

To the old Airfields, Haunts and last resting places in France and Flanders, of the Airmen of 1914-18 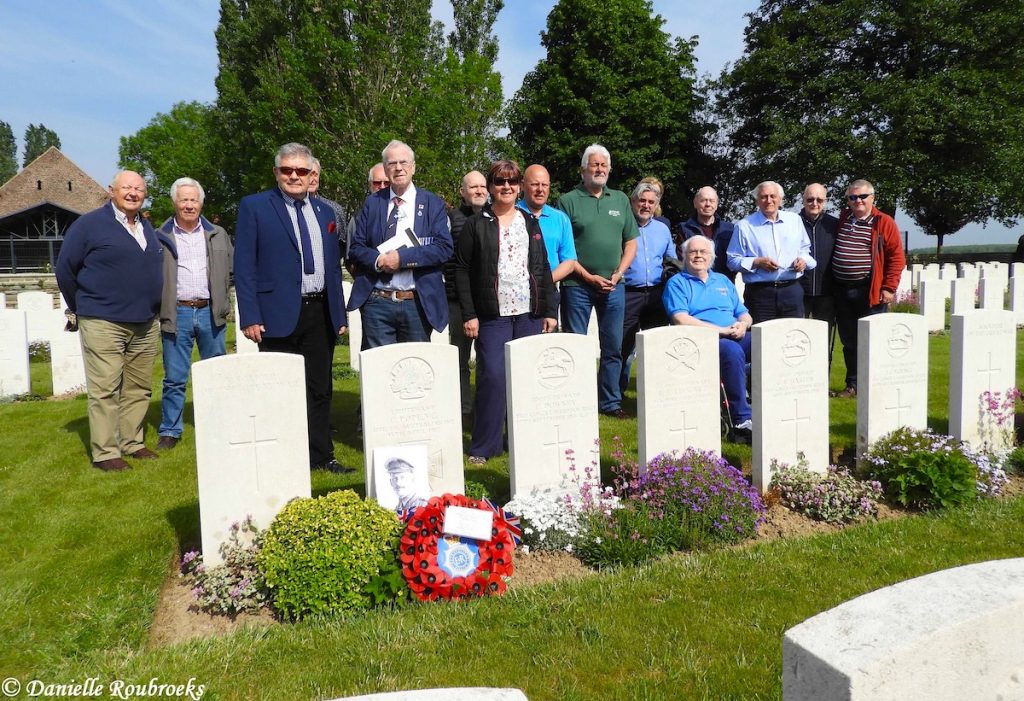 At the grave of Charles Pope VC

“Thanks for all your Remembrance, Leadership and the support teams that made that such a brilliant week of tributes to the Airmen of WW1. Lived up to your promise. Much new material to reflect on and unique places visited.
Just outstanding!
Professor John Grieve CBE. QPM.
Hampstead (Police) Pals Battlefield Tours
May 2019
In the footsteps of Captain R N Ekins 92 Machine Gun Company 1917 (Survived the war) 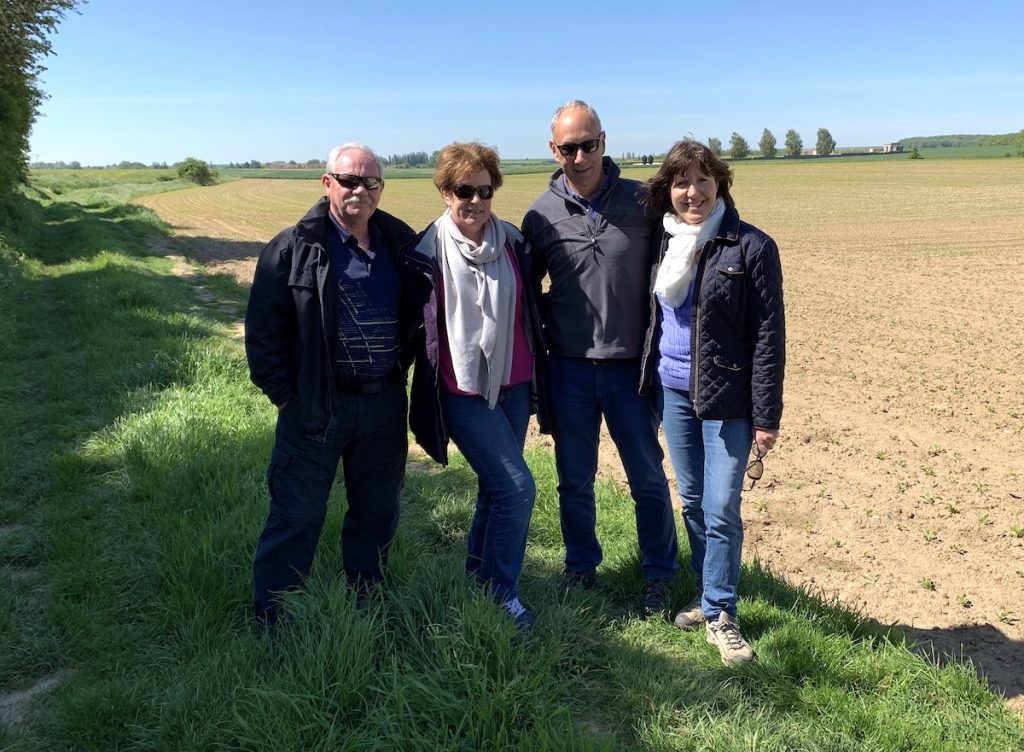 “In following the footsteps of my wife’s grandfather, Captain R N Ekins MGC, we can’t thank you enough for your help and guidance. We were very impressed with your detailed knowledge of the places he passed through on his way to his last known positions on the approaches to Arleux-en-Gohelle. Who would have known that the German strongpoints still exist?!!!, Without your guidance, we would never have known they were there.
Thank you for your time and patience, you have such a lot of knowledge and imparted it in a very professional manner
Thank you
Martin and Lindsey Snell
May 2019 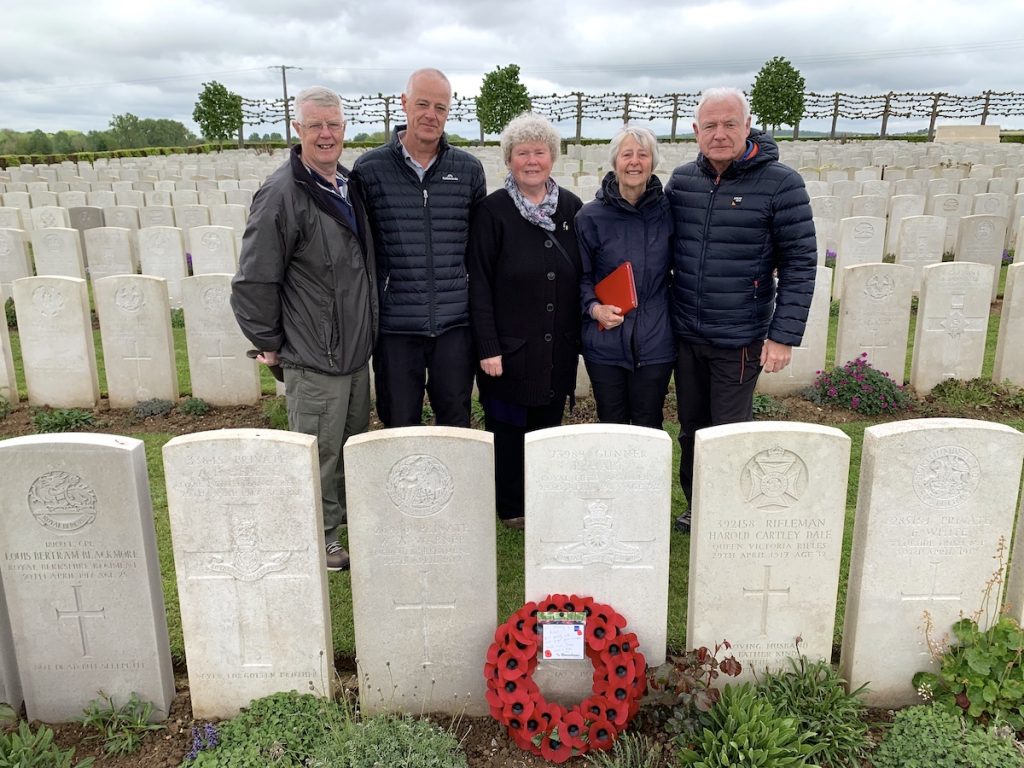 “Many thanks to Jon for taking us on the wonderful family pilgrimage to follow our Great Uncle’s journey on the battlefields of WW1. Not only did we visit his final resting place but using his vast knowledge and wide resources, Jon took us to the places where our uncle was billeted, where he had leisure time and where he fought and finally fell. Jon’s depth of knowledge and his passion for these times are most impressive. We especially enjoyed listening to his stories of the many war veterans he interviewed. Some of these made us laugh but some made us cry. Thanks for showing us the photographs of so many soldiers and telling their stories and also for the touching poetry you read. It was a journey we will never forget and our gratitude goes to Jon – a man of compassion and great integrity. Thanks Jon.”
Alan, Irene, David, Carole and Neil.
Preston Lancashire.
May 2019

A weekend tour of the Ypres Salient with Metropolitan Police (Retired) Officers.

“I just wanted to say a big thank you for an excellent weekend. Very professionally run and your knowledge was incredible. Everyone thoroughly enjoyed it and we cant thank you and Rick enough. (You made an excellent team) It just ran so smoothly and was great. Just talking to the guys, I know we will be back for another dose of your knowledge and humour at some point to a different location.
Thank you again”
Anthony Hays
Metropolitan Police Battlefield friends.
April 2019