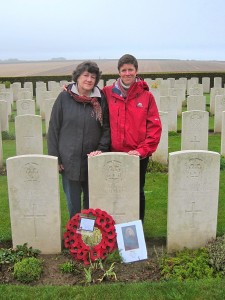 In Dad’s Footsteps..
‘Jon arrived to pick us up right from the door of where we were staying in Arras. The Land Rover was spotlessly clean and Jon made sure that we were warm & comfortable. I’d given him some information on my Dad, who was in the Tank Corps in the 1st World War, and also my Uncle who was not lucky enough to survive and Jon had found out further information for me. Our first stop was at the Tank memorial at Pozieres. Unfortunately, it was raining, but unperturbed, Jon produced 2 large umbrellas for us! Jon is very knowledgeable about the area and was able to take us to the very spot where my Uncle lost his life, where he and his friends were originally buried and then to the cemetery where he now rests at High Wood. He’d also prepared a wreath for us and said the ‘Ode of Remembrance’ – an incredibly moving experience. My father, Albert Victor Day was a Tank Driver and Jon drove down “The way of the Tanks” near Flesquieres at 3 miles an hour, the speed of the Tanks. He also arranged for me to meet Philippe Gorczynski and to see the Tank, ‘Deborah’ that he had found. What an amazing experience! My daughter and I really enjoyed our 2 days with Jon and we would recommend him to anyone interested in the Arras, Somme and Cambrai battlefields. What stood out was his in-depth knowledge of the area and the terrible events that had taken place there. He has an intimate feeling for the region & landscape and brought every aspect to life for us, with everything from first hand stories from old soldiers, to war poems, to facts and figures of the battles. We would have missed out on so much had we not had Jon!
Pauline & Nina Gurling
September 2013 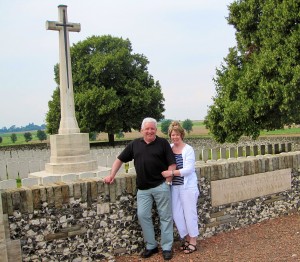 “We have just returned from a fantastic tour with Jonathan Nicholls in the Arras area of France, following the Scottish Regiments in particular the Seaforth Highlanders. Having Jon at hand giving his expert opinion gave clarity as he clearly defined the battlefield layout which helped to make the whole experience feel very realistic. Jon’s depth of knowledge regarding the battles, battlefields and cemeteries is extraordinary. We were looked after exceptionally well and thoroughly enjoyed the whole experience. I can highly recommend this tour to other interested parties in Scotland.”
Willie & Helen Aitken
Inverness. Scotland. August 2013 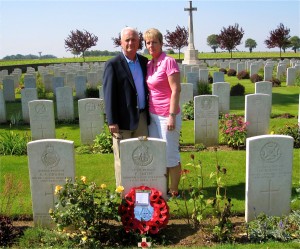 “The day we spent with you was amazing. Travelling from the other side of the world to see Grandad Smiths grave was daunting to us. We would have missed so much if it hadn’t been for your research and knowledge. Starting at the Wellington tunnels in Arras was so poignant coming from New Zealand we were so proud of our lads who helped to develop such a complex system for battle. Going on the actual battlefield was incredible to see where Frank would have been, and also the hospital he would have lain in. His grave site was so beautiful, with the whisper of the wind in the trees it was as if they were speaking to us, it was hard to leave him. We can see the impact you have had on Arras and you brought such special moments into our lives, thanks Jon and we hope to meet again someday.”
Margaret & Roger Smith
New Zealand visitors August 2013
To the grave of Grandfather, Frank Smith, 10 Durham Light Infantry.
Warlincourt Halte British Cemetery Saulty.

“When Jon says he provides door to door service, that is the absolute truth. He provided the transport, organised all transfers and accomodation. His knowledge is unsurpassed (including a wicked sense of humour). Every detail of our excursion was planned as if we had give him detailed instructions, even to the wreath that was provided for my great uncle’s grave. Jonathan was able to provide us with written information we were unable to access ourselves. My life will be forever changed, being the first of my family to visit John Davies grave, and Jonathan Nicholls not only made me feel proud, he gave me a lasting visual picture of John Davies war service and death.
Thank you Jonathan for a life changing and memorable experience.”
Lorraine & John Dowson
Australian visitors. June 2013.
To the grave of relative John Davies RAMC. Guillemont Road. Somme. 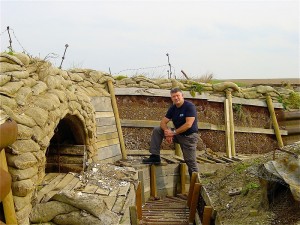 Blown away..
“Thanks for everything you did for us, I was blown away by your knowledge and passion for the Great War. I am reading Cheerful Sacrifice at the moment and enjoying it immensely. I had not read much about Arras 1917 but my lack of knowledge was soon put right under your excellent tutelage.. and the jokes too! I came away with a lot more to ponder about and the satisfaction of having those gaps in my knowledge filled by an expert”
Alan James Barker
Author ‘A Sacrifice of Innocents’
Battle-Honours Tour August 2012 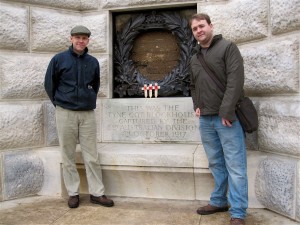 “In short, the trip was far better than we could have imagined and you have, Jon, done two things exceedingly well. First, you have both oriented us to the physical battlefield landscape of the British Sector and secondly you have also made that battlefield a living and perpetual monument to the men who sacrificed their all, through understanding and appreciating the stories they shared with you in the twilight of their lives. To have the real connection to those veterans that you provide is invaluable. Thank you for preserving their memories and helping us to better understand.”
Greg Goodell
USA Pilgrim March 2013 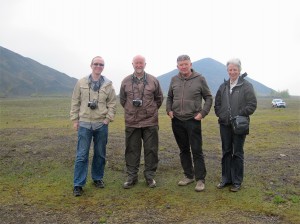 On the double crassier Loos. With Fox family

Thank you for organising the trip to Loos. At long last Lyn was able to see the area where her uncle, Private Walter Ernest Oliver (Ernie) was killed and to place a wreath under the panel bearing his name at Dud Corner Cemetery, Loos.
We all thought the trip you organised for us door to door, was efficiently planned, friendly, knowledgeable and compassionate. An unforgettable experience.
So much so that we are now tracing the WW1 history of Ernie’s brother Fred and hope to use Jon to ‘follow in his footsteps’.
Ray, Lyn & Craig Fox
2 May 2013

“After getting several quotes from touring companies we decided to hire Jonathan Nicholls, author of the book, “Cheerful Sacrifice”.
Our goal was to see and learn as much as possible in our short visit. Upon meeting Mr. Nicholls, we instantly knew that we had made the correct choice. Jonathan has a vast knowledge and understanding of the Great War. He has been visiting the battlefields for over 35 years and it shows. He takes you back in time by sharing veterans stories. He will also take you to places impassable to tour buses and make you understand what the men endured. It was an emotional tour for me. We did not simply stop at a memorial for a photo. We stopped to share stories and remember the men. This was a once in a life time experience for me and for those interested in more than just sight-seeing, I recommend Jonathan Nicholls in the highest fashion”
Brian Waters
USA Pilgrim March 2013

“Despite the poor weather, the anniversary trip to Arras was still very enjoyable, visiting many interesting sites. To get the most out of such visits , it’s necessary to have a guide/historian of Jon’s calibre who has all the relevant facts at his fingertips. Moreover, because of the esteem in which he’s held, it’s sometimes possible to gain access to places that otherwise could not be visited. Many thanks for all your efforts.”
Doctor Meirion Hughes
With the War Research Society Arras Anniversary Tour
April 2013 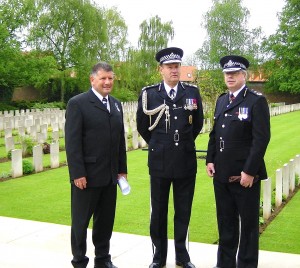 “His knowledge of the First World War Battlefields is remarkable. He has taken us back in time and uncovered the forgotten story of Charles Pope, our own VC. In doing so he has forged a real link between London and Arras.”
Sir John Stevens
QPM
Commissioner of the Metropolitan Police
Speaking at Arras Town Hall 2002 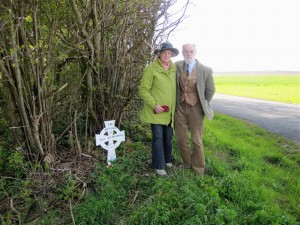 “Just a line to thank you very much for all the trouble you have taken to make our visit so memorable. I found the whole thing very moving, and feel I know Uncle Phil much better. I have always felt the VC citation very lacking, somehow. It was such luck that Jarvis found you for us, and that made all the difference. I shall remember it as a very special weekend, and if I meet anyone thinking of going over, I will certainly recommend you”
Pamela Holliday
Niece of Phillip Hirsch VC, 4th Green Howards, killed in action 23 April 1917
Pamela was taken to the spot at the very time and on the day, he fell. April 2012.

“Jon Nicholls gave us a great insight of what went on before and after the Wancourt battle near Arras and his book certainly helped us to understand what those poor sods were up against…a truly ‘Cheerful Sacrifice’. Would have missed it, if it had not been for Jon, our guide. Many thanks.”
Jarvis Browning
April 2012 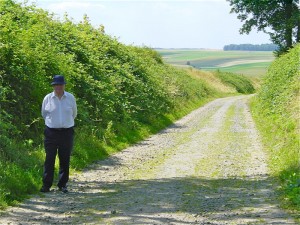 “I am still in that sunken road with you at Neuville Vitasse, speaking to them all! A wonderful memory! Great trip again kid, nothing else to say.. just Mega!”
Tony Spagnoly
Author, Battlefield Guide
June 2001 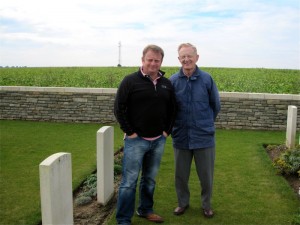 “Many thanks for such a memorable trip – A lifetime ambition fulfilled I can’t stop thinking about all those brave boys. We are very grateful for the new information you provided about my Dad.”
Peter Weston
Son of Thomas Weston 2nd Londons, Wounded Arras 1918
Taken ‘in his father’s footsteps’ October 2012

“May I express our thanks for an absolutely splendid trip. It was all that we expected, good food, good wine and above all good company. Sometimes it’s all too easy to accept your high standard as ‘the norm’ without recognizing the efforts that go into organizing and running such a trip. We look forward to the next tour!”
Mike Olley
Merseyside Police
October 2004