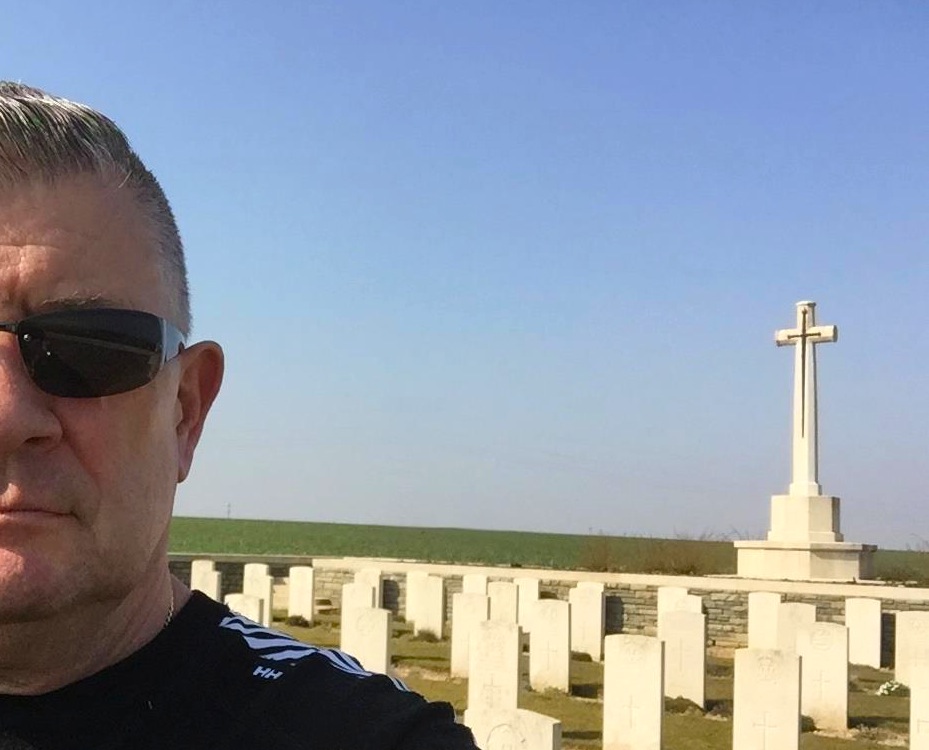 “I have spent half of my life working as an academic in the university sector, both in the UK and Ireland and very rarely have I come across a professional academic with the depth of command of their subject as you have over the history of the Arras battlefield. Your stories of the people who fought and died on it, really brought it to life for us”
Professor Roger Whatmore.
Imperial College
London

Jonathan Nicholls is an independent guide to the battlefields of the Western Front 1914-18, with over 40 years experience. He specialises in taking small groups of 1-10 persons from the UK, on private and personal, ‘bespoke’ tours to the Battlefields of the Great War. (see his testimonial page)

He is also available to professional tour & travel companies and in the Centenary years 2014-2018, was the principal guide for Travel Editions which conducts tours for the Daily Telegraph and Guardian Newspapers.

With a unique knowledge of the old action spots, he is in constant demand as a battlefield guide and led his first tour to the Somme in 1978 with a battlefield group formed by London Police Officers, known as the ‘Hampstead Pals’ of which he is the founder.  He also loves that corner of northern France, which is so historically and emotionally connected to the people of Britain and her Commonwealth.  Canadian and Australian visitors to the battlefields are his speciality. 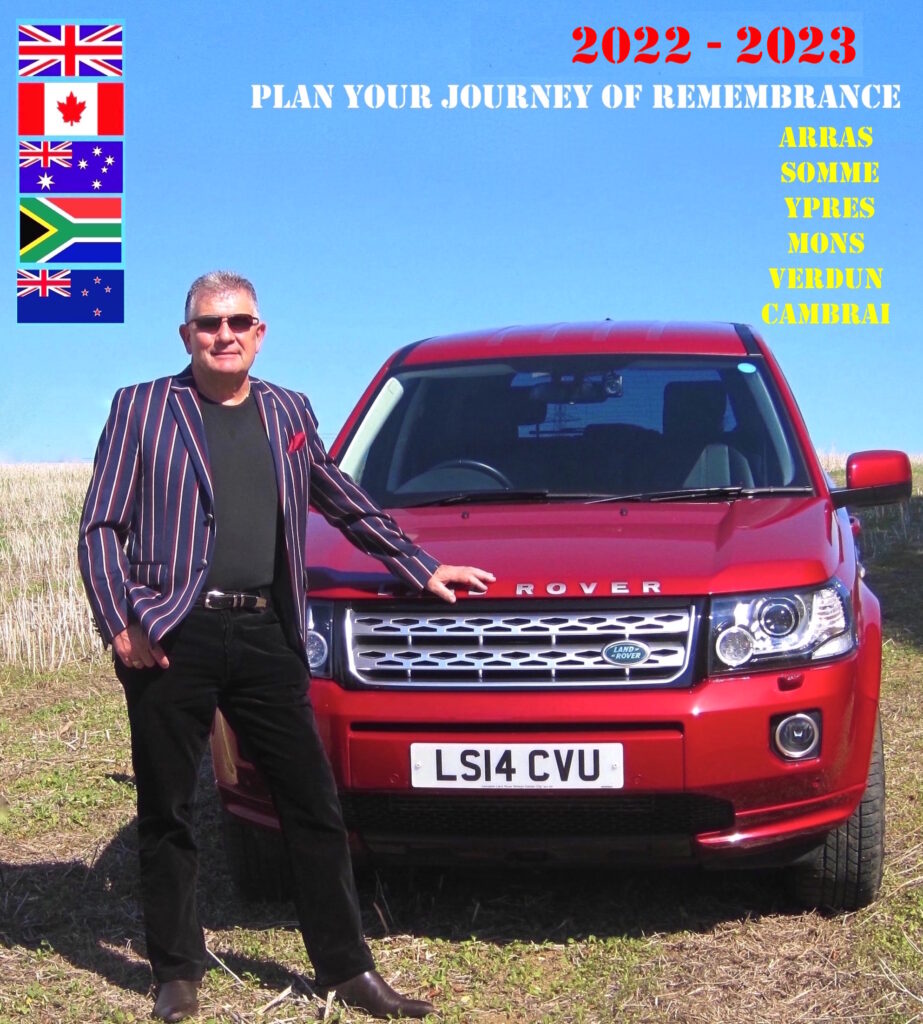 The long-awaited Centenary of the Great War 2014-2018 has now passed but not the demand for pilgrimages to the battlefields. More people than ever are enquiring how they can best visit the old action spots in France and Belgium and the graves of lost relatives. Jon has a deep knowledge of these sacred places and of the great battles that still jar our conscience today. He also operates from home as a researcher, specializing in individual soldiers and units, incorporating his extensive library and collection of private papers. Now is the time to plan your personal pilgrimage. The Centenary may be over but remembrance continues. 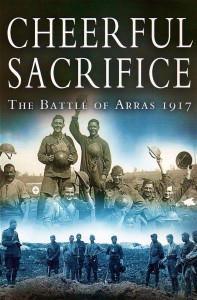 Jon has held a lifelong interest in the First World War since his childhood. Both of his grandfathers served in the Infantry on the Western Front. He is based in Hemel Hempstead, Hertfordshire and is regularly in Arras, his second home and a great base for also visiting the Somme and Ypres.  He is the author of the highly acclaimed,  ‘Cheerful Sacrifice The Battle of Arras 1917’ (Pen & Sword 1990) which is still in print (Amazon & other good bookshops) and has gone to nine editions. It is the definitive account of The Battle of Arras 1917, using the original stories of many veteran soldiers whom he sought out in the 1970s and 1980s. He is honoured to have known personally, over 300 veterans of the Great War, several of whom, accompanied him to France when researching for his book in the early eighties and with whom he became close friends. Consequently, his expert narrative on the battlefields is littered with unique soldiers’ stories and colourful anecdotes, some sad, some bloody, many funny. Quite simply, the British Army at war. 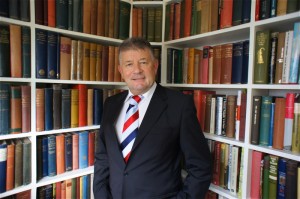 Jonathan Nicholls in his library

He is a retired Metropolitan Police Officer and also works as a musician (see Mixed Feelings) when not on the battlefields.  He is an original member of the Western Front Association (10) Gallipoli Association and a Friend of the Imperial War Museum.

Other historical British battlefields which can be visited en-route to the Western Front, include Agincourt, Crecy, Amiens, Waterloo, Wormhout, Cassell, Calais (1940).

What the customers said about their guide, Jonathan Nicholls:

“Most interesting and rewarding experience. Were particularly impressed with Jonathan Nicholls and his knowledge of the subject, and also with Steve who handled the tour so well. We would certainly like to book a further tour with you perhaps next year”
Mr John Goulden who travelled on 01-Oct-2015

“Jon Nicholls was superb. His knowledge and enthusiasm made the tour the best we have had. We have bought his book!”
Mrs Kathleen Teale who travelled on 01-Oct-2015

“Jon Nicholls is an excellent guide. He can bring to life the horrors of the War by his many anecdotes gleaned from his many contacts with old soldiers.”
Mr Donald Shaw who travelled on 01-Oct-2015

“Travel problem on the way back with Eurostar was brilliantly dealt with by Karen and your office. Jonathan our tour guide, was just magnificent, even magic Thank you”
Sir Alan Craft who travelled on 25-Jun-2015

“Jon Nicholls, our tour expert, was a fountain of knowledge and pulled out all the stops for us - indefatigable.”
Mr John Boyes who travelled on 25-Jun-2015

“Our guide, Jonathan Nicholls, was excellent. His encyclopedic knowledge of the battles and the characters involved, both leaders and the led, brought home to my wife and me the horror and the bravery. The tour showed us how little we knew of this momentous period in our country's history”
Review by Mr Colin Dight who travelled on 07-Aug-2015

“What made this trip was the Tour Guide, Jonathan Nicholls and his wealth of knowledge, being a military historian myself, I know the years of research required to make him into an 'expert' on WW1 battlefields/Cemeteries.
Mr Trevor Walhen who travelled on 28-Aug-2015

“Tour Guide. Well, where does one start? We have over many years visited the WW1 battle areas both independently and with an organized tour. All much to our benefit with added knowledge. This tour with Jonathan Nicholls surpassed all the expected. The humour, detailed knowledge and delivery was quite simply outstanding. Perhaps too detailed for some but if one really wanted to explore and obtain the necessary information Jonathan's method was most welcome. Thank you Jonathan for a most memorable and rewarding experience”
Ms A Cunningham who travelled on 07-Aug-2015

These reviews and many more, can be seen on the Travel Editions website.