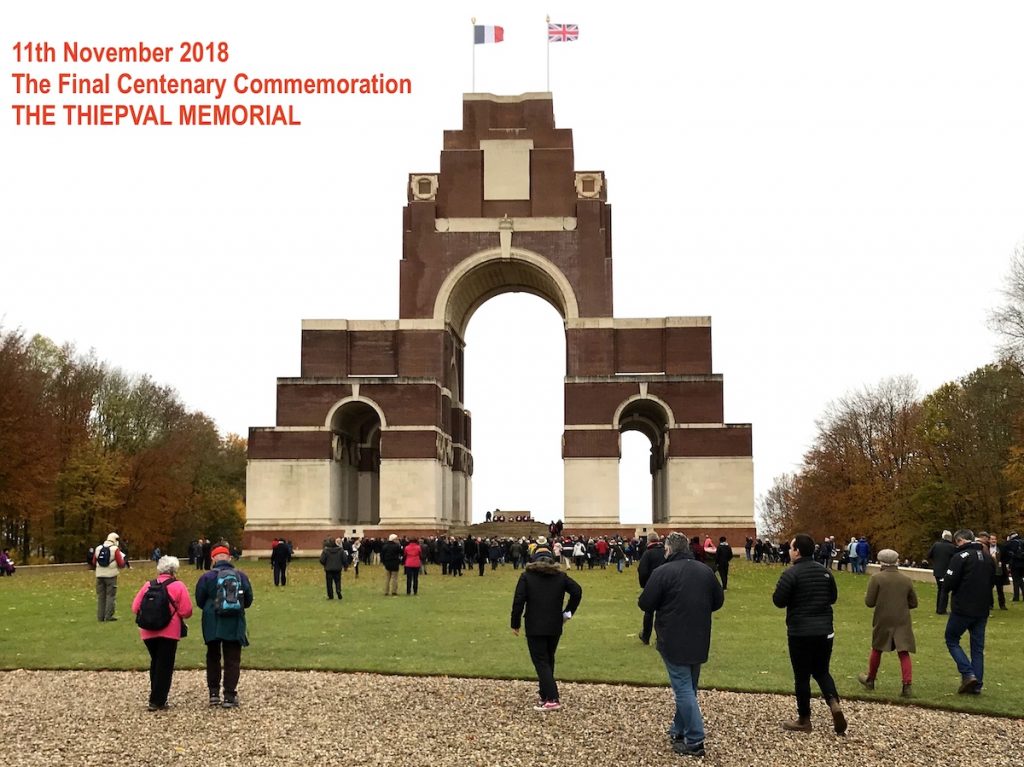 Jon says.. “It was an honour to be the principal Somme Battlefield guide on this final tour of The Birmingham War Research Society founded by the late Ian Alexander, on this final Centenary Commemoration, 11th November 2018. The 100 year Centenary of the Great War 2014-18 is over. The Remembrance never ends.”
With 45 pilgrims.
11 November 2018

Hindenburg Line and a weekend of discovering the Arras Battlefields 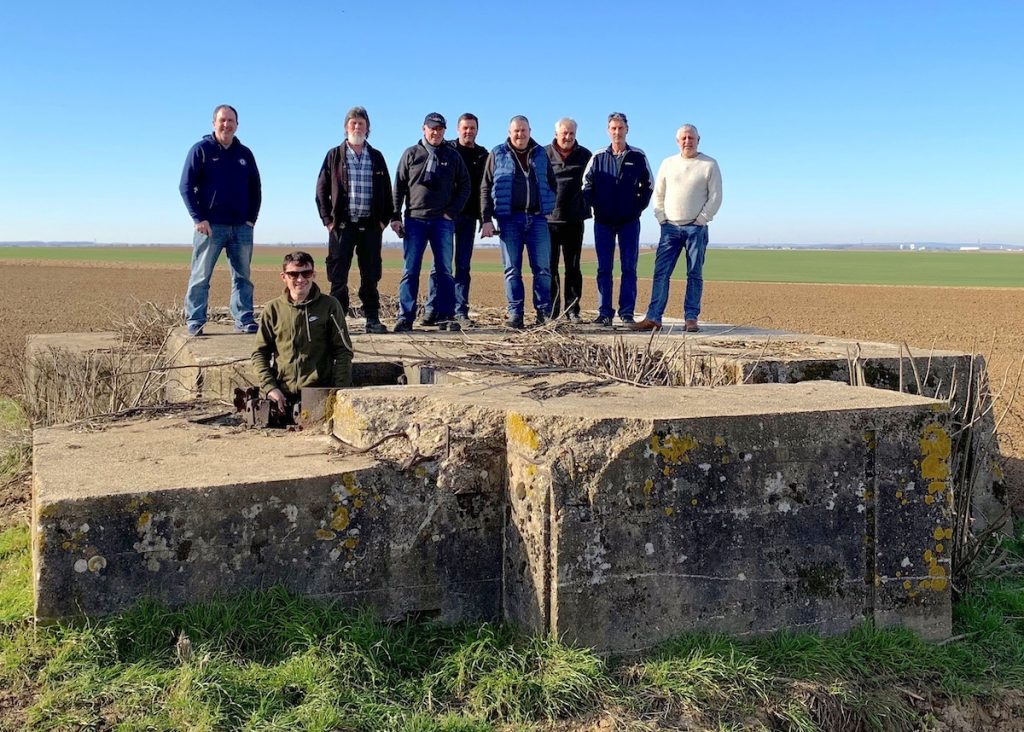 “All the lads agreed it was smart move having you as our guide on this tour of the Arras battlefields. A great weekend of discovery and stories of the British Army at War. Your knowledge was simply amazing and we have not stopped talking about it! We cannot wait for the next one. Thank you Jon! Marc Gavin
The Old Bell Gate Pub Battlefield Society
Hemel Hempstead
March 2019 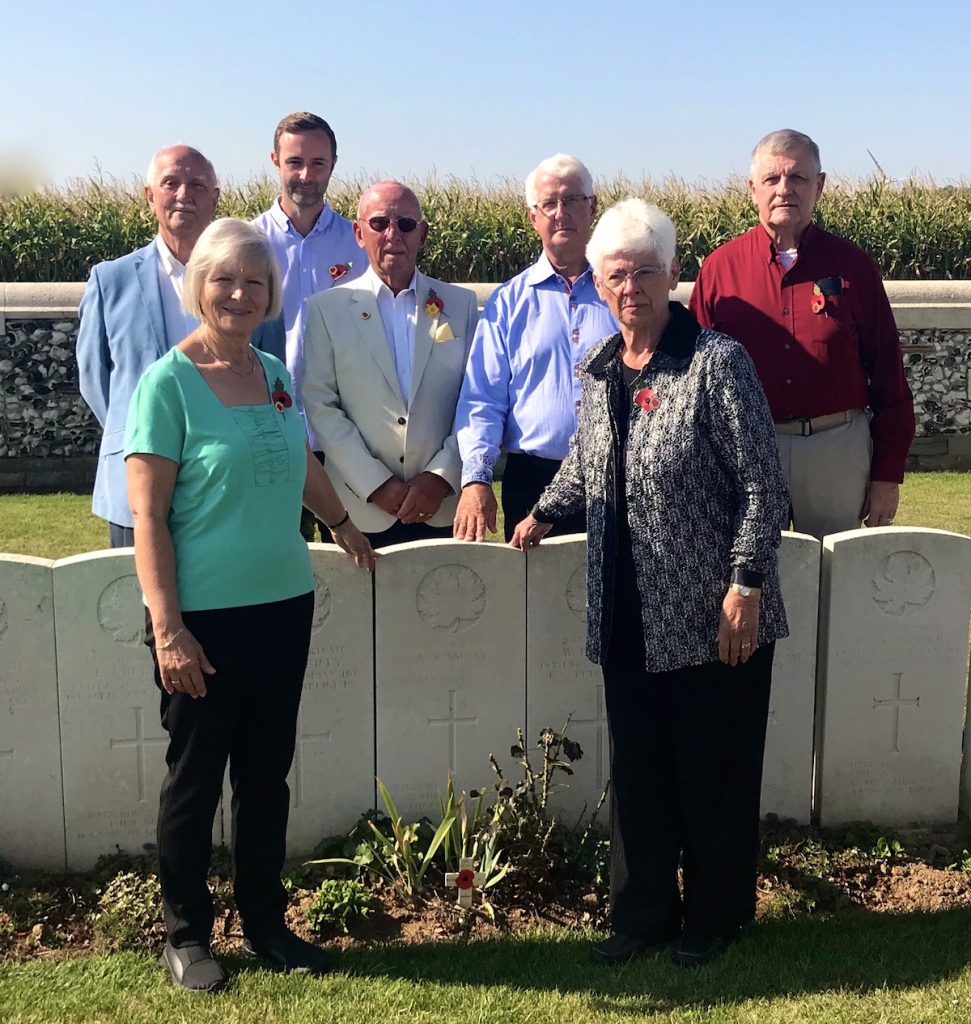 “Everyone on our family pilgrimage have spoken and written to me showering praises on the professional manner in which you conducted our tour. You were able to pinpoint to a fantastic degree how Uncle Alex Ramsay and his comrades were killed in action. You also assisted in our wee ceremony for Alex at Dominion Cemetery in an appropriate and caring manner. Our family group will never forget Sergeant Alex Ramsay and we are thrilled that someone like you has the skills, knowledge and dedication to help all those who lost their loved ones in that terrible war, to keep that flame from going out. May you continue to help those of us wanting to pay tribute to our family members with your unique expertise.”
Alex Walker.
Cyprus
September 2018. 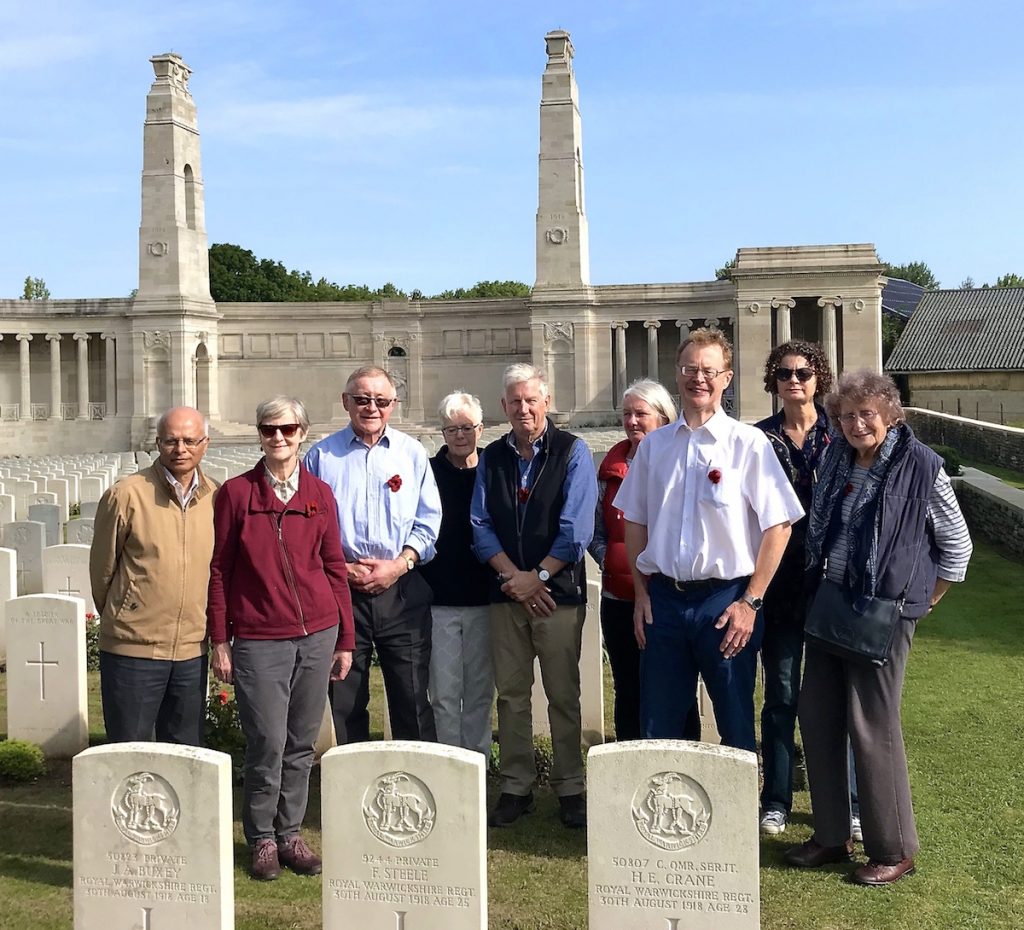 “Thank you very much Jon, for leading our party for Horace Crane’s memorial. We greatly appreciated your knowledge and enthusiasm for all of the sites you took us to. But especially we want to thank you for Horace’s day. Seeing his grave, laying the wreath, were made special for us. Also for all the research you did on Horace and then taking us to the battle site that took his life, a real treat.”
Jenny and Martin Crane
London
August 2018 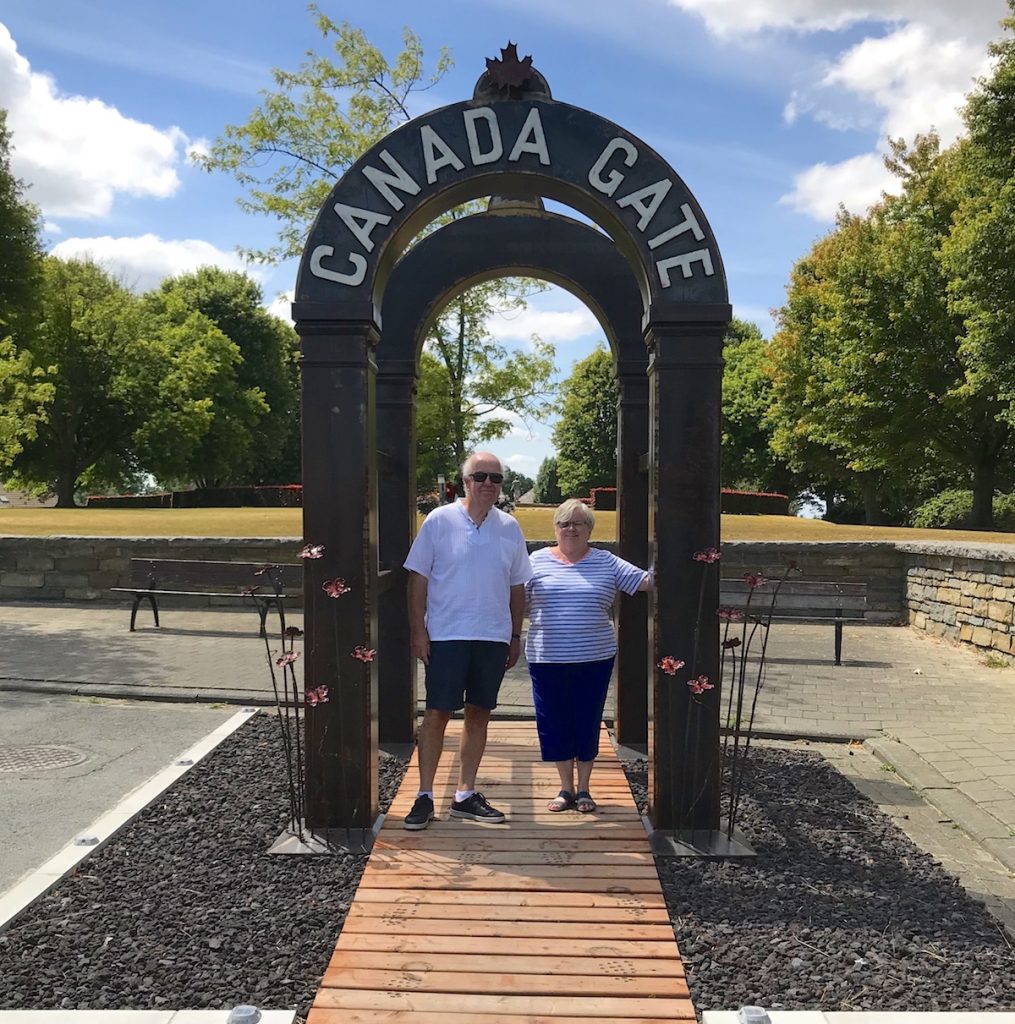 “My wife and I hired Jonathan as our personal guide of WW1 battlefields, primarily connected to Canadian campaigns. In the 3 days we were together, it was obvious that he had an intimate knowledge of the area as he regaled us with infinite minutiae of everything that happened in the Arras/ Ypres/ Vimy area. Including personal stories, as told to him by Veterans he had previously become acquainted with and escorted on his tours. Some of tales were happy, but many of them were sad but always told with enthusiasm and relish, that virtually brought the original soldiers back to life.
Jonathan has a typical British sense of humour that makes the time skip by and was a delight to be with. We highly recommend him for any battle field excursion that you may have in mind”
Peter & Dell Langham.
Toronto. Canada.
August 2018

In The Footsteps of The Red Baron.. 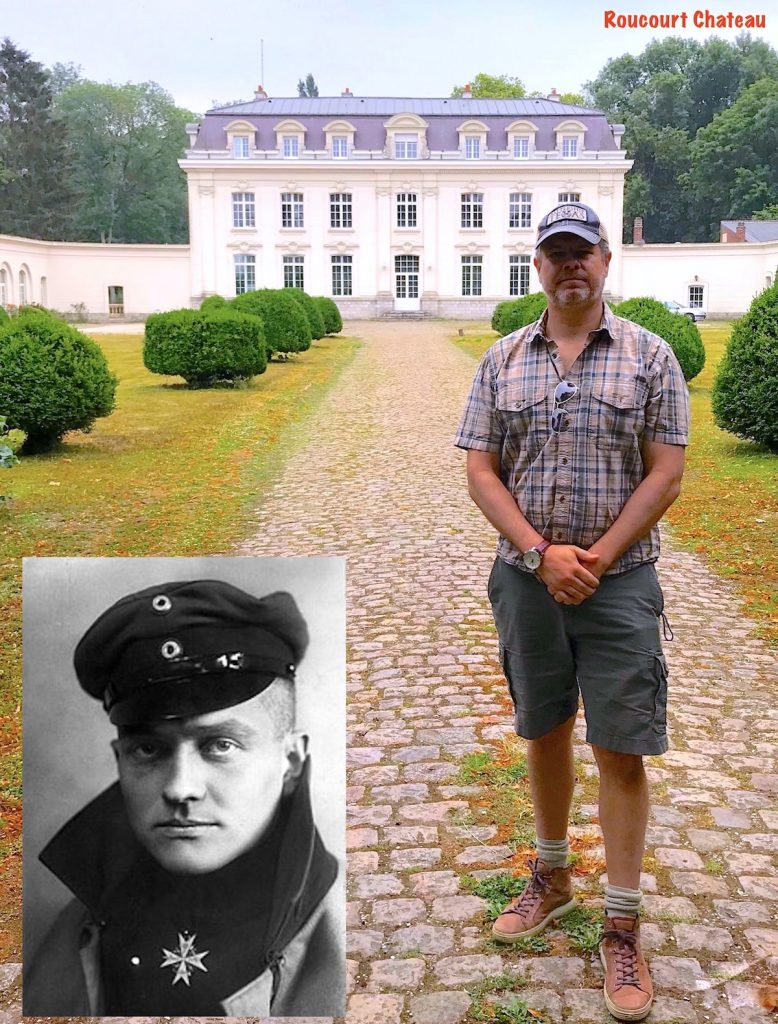 Brian Cleveland and ‘The Red Baron’

My tour with Jon following in the footsteps of Manfred von Richthofen was truly a magical experience. I wanted to get beyond the mythical figure of the “Red Baron” and we did just that and so much more.

Roucourt Aerodrome then and now

We stood on the aerodrome where Richthofen made his first kill and another where he took off for the last time. We saw the chateau where he lived while dominating the skies and we stood in the field where he crashed and died. It was interesting, fun, and surprisingly moving. We found the graves of his victims in ‘off the beaten track’ cemeteries that receive almost no visitors. In doing so, the world of the “flying ace” became very real, beautiful and horrible in equal measures. Highly recommended. 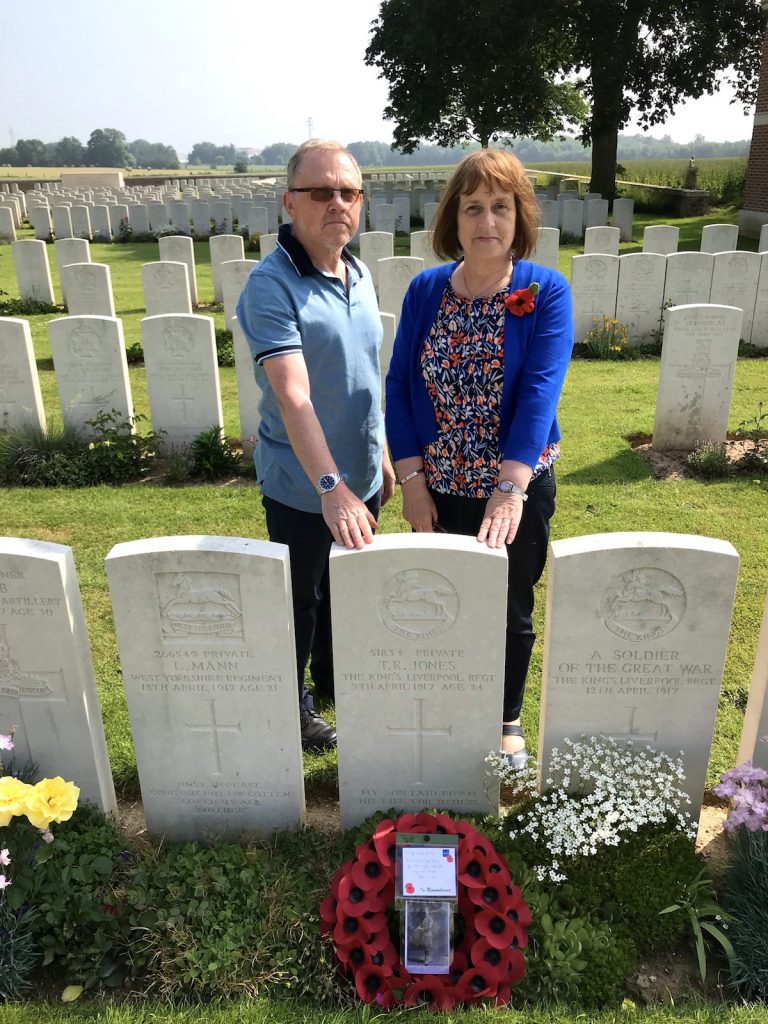 I had promised myself that Alun and I would one day visit the graves of my paternal great-uncles who were killed in action in the Great War. My grandparents and parents had never had the opportunity to do so. I wanted to do it properly so I researched the battles of Arras and found Jonathan’s informative book “Cheerful Sacrifice”. I then knew that he was the right person to take us on our pilgrimage – and my instincts were spot on!

Jon carried out research into both of my great-uncles and was able to show us the routes both would have taken during their final hours. He provided the history of both the 9th and 13th Battalions in which they fought and died. I was touched by his unprompted tribute of the “Ode of Remembrance” at each grave and then left us to our own unhurried, private contemplation. We had realised on the day we visited both Tilloy and Queant Road Cemeteries that Thomas Richards Jones would have spent his last night in the Wellington Tunnels in Arras. We wanted to visit and Jon managed to get us in at very short notice. Anyone that goes with Jon on this journey will find out that he is well known in Arras, in the hotel, cafés, restaurants and is treated as a long lost friend and his guests are made very welcome too! We couldn’t have wished for a better informed or more genuinely sympathetic guide for our visit. Thank you Jon for a most memorable and personal visit to Arras. 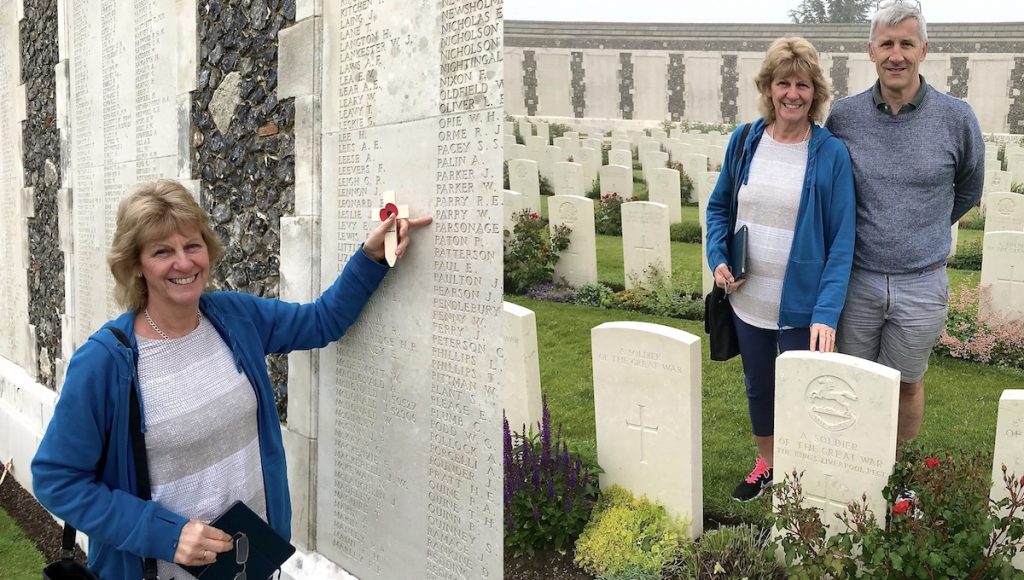 ”We have just returned from a tour with Jon of the battlefields around Ypres and I can say it was the most amazing experience of my life. I wanted to see where my great uncle died and Jon did exactly that. He researched all the troop movements and the battle then took us on that journey. He has so much knowledge and understanding of the whole war but also knew the brave and tragic stories behind so many of the gravestones. Every cemetery we visited was brought alive with his storytelling . He is a mine of knowledge and a gifted guide. We couldn’t recommend him any higher.” 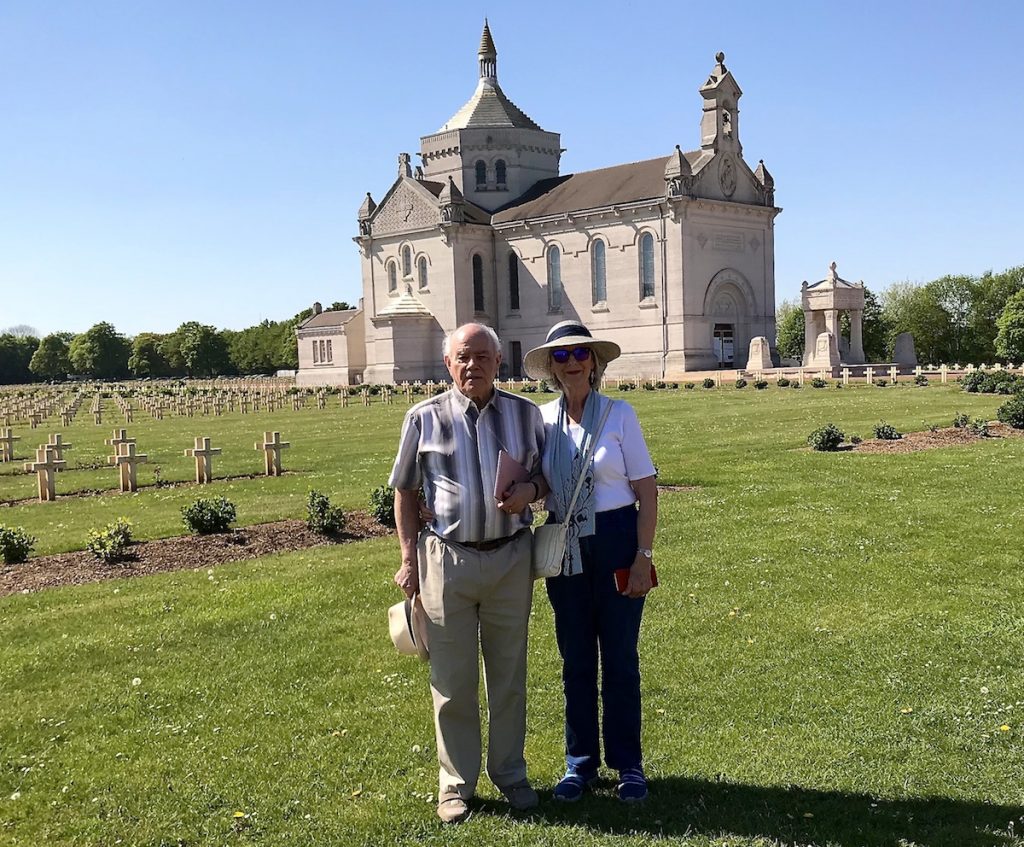 “It is difficult to thank you enough for our experience with you over the last few days. It has been so informative, emotional and amusing. You have such a wealth of information and old soldier’s tales that undoubtedly enhanced our experience, over and above had we journeyed on on own without a guide.”
Stephenie & Paul Mackie
Liphook
Hants
May 2018 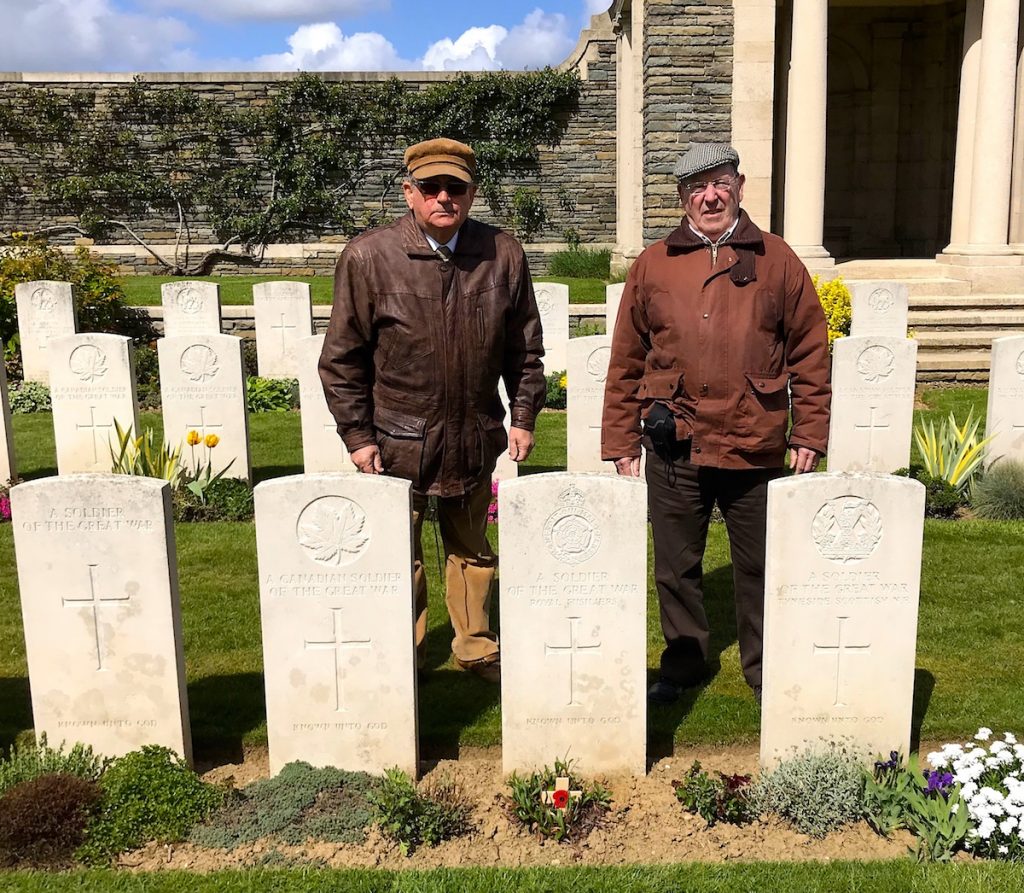 “The time my cousin and I spent touring the Arras battlefield and surrounding villages and cemetery’s with you was extremely interesting, informative and very professional. We wanted to trace our grandfather’s last hours, this you did brilliantly. The use of the G.P.S. was incredible, making it real and very precise. The visits to the cemetery’s and the stories of the various people who are buried there was fascinating. We would always recommend you to anyone who wanted a similar fascinating and stimulating experience.” 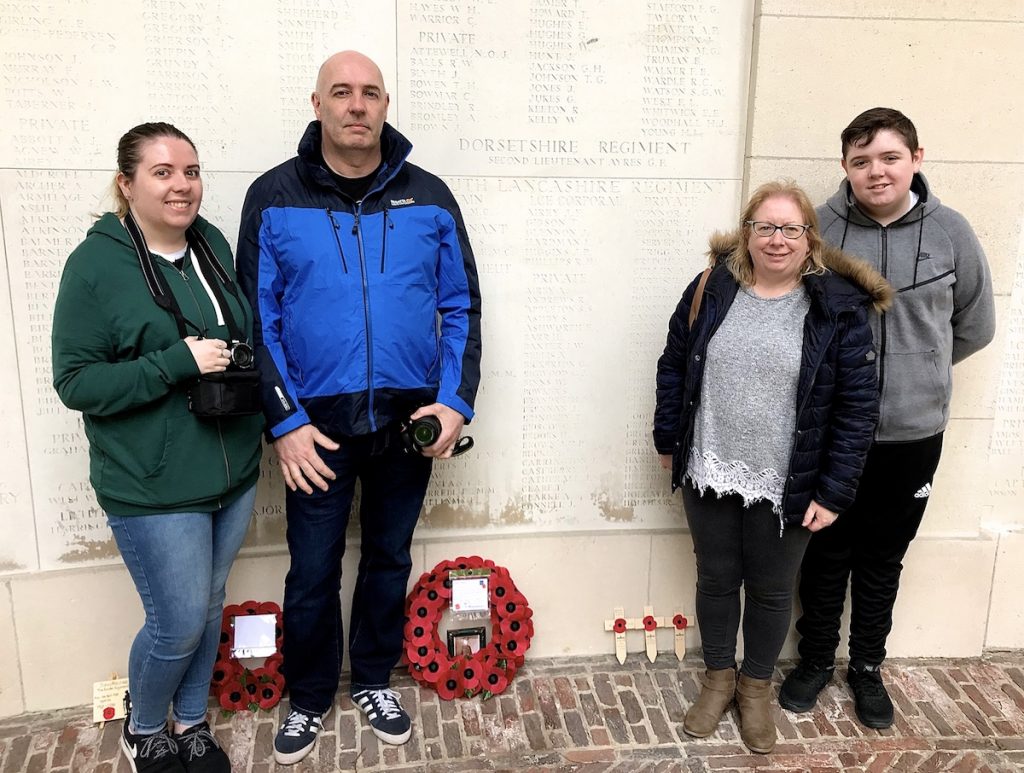 “I can’t fully explain how outstanding our trip was with you to Ypres. We wanted to trace the final moments of my Uncle Arthur and booked a bespoke tour of the area with yourself. What you delivered Jon was so much more than that. You have such a depth of knowledge and you kept us entertained with amazing stories and facts, the places we visited were truly brought to life. You took the time to engage with my children and they were kept so interested. To be able to follow that last day of my Uncle’s life to a moment where we could say, ‘this field, this patch of land is where he most likely fell’ was incredible. Every cemetery you took us to, you could regale a fascinating story about a person buried there. We never felt rushed, you couldn’t have given us a more perfect time. If anybody is thinking of booking a WW1 tour, I would highly recommend you, you are a brilliant guide and a genuinely nice guy. Myself and my family will never forget this, thank you.” 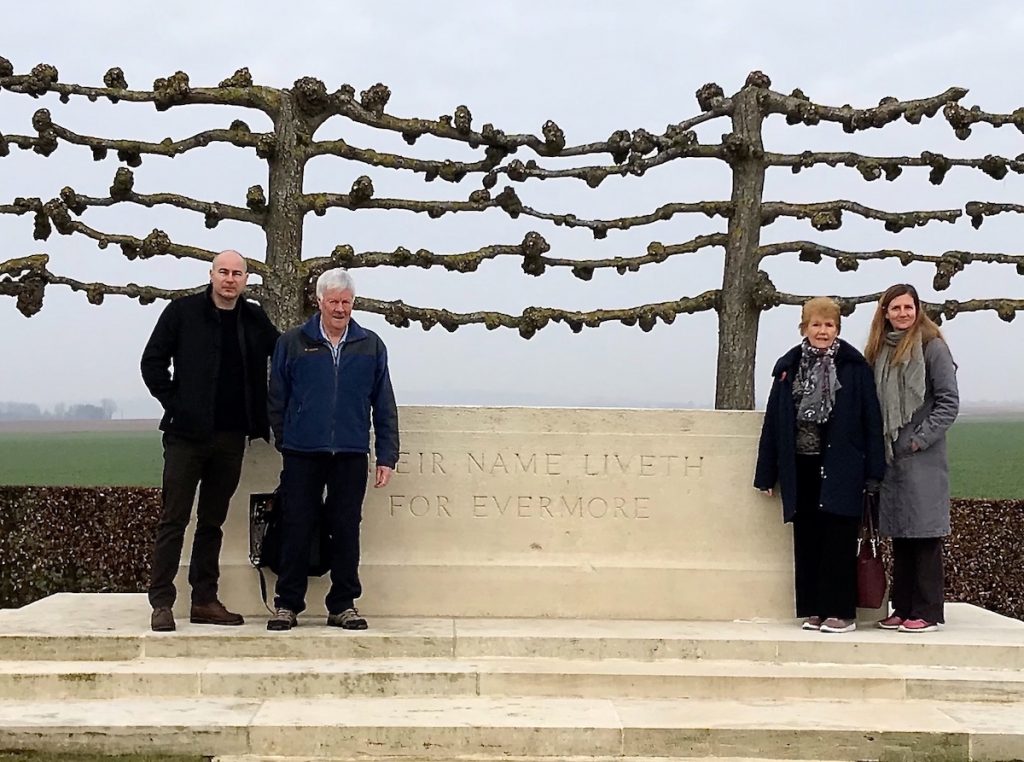 “We went to pay our respects to two relatives who we knew had fought and died in Arras but we had little other information on their lives. With Jon’s research and knowledge we were able to pay our respects to William Herbert Hills (11th Middlesex) and Robert William Cotton (1st/13th Kensington). More than that though, he was able to bring their stories to life and we learnt about how they lived, fought and about the ultimate sacrifice that they paid. Jon offers a totally bespoke service that made the whole trip so informative, moving and tailored to our needs. Using his trench maps, we even stood in the fields of Arras above the former trenches where our relatives fought. We highly recommend Jon and can’t imagine a better way to visit the battlefields.” 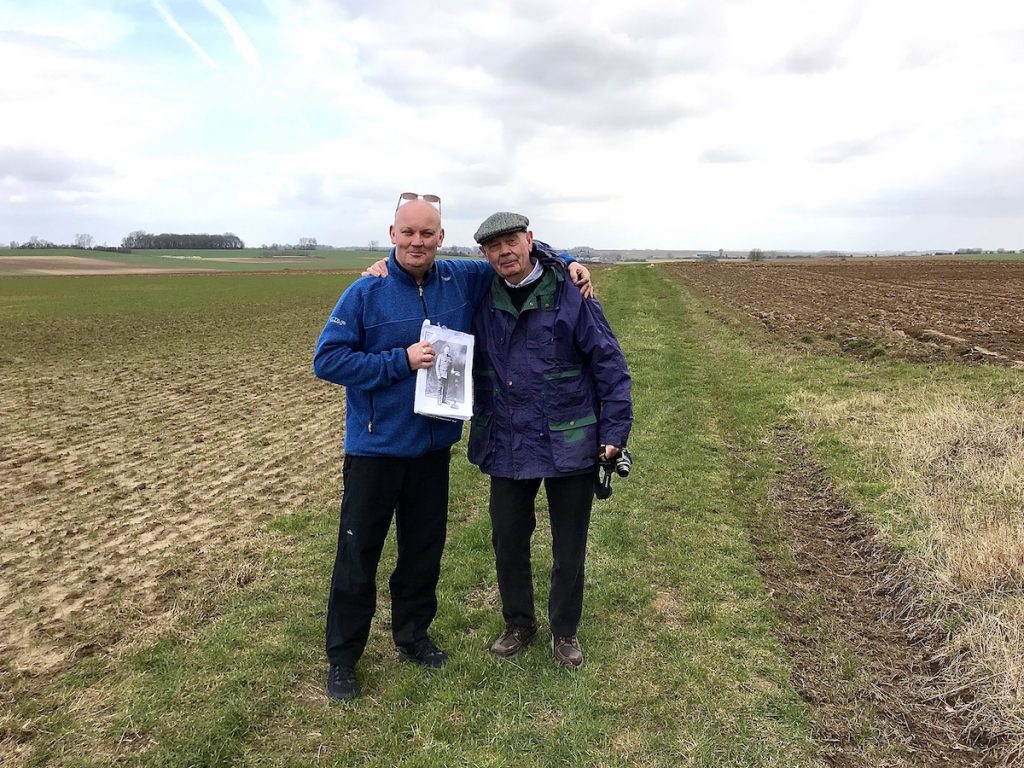 “My Dad and I cannot thank you enough for helping us to exceed our wildest expectations. We had hoped to get near to the scene of my grandfather’s actions on 21st March 1918 in the Morchies sector, but never thought that we would get to the point where we felt that we were actually retracing his footsteps exactly one hundred years on from that day. You managed to bring history back to life for us and we are now able to fully understand what occurred on that fateful day at the beginning of the Kaiserschlacht. Both my Dad and I agree that you gave us an absolutely first class service, going way beyond what we expected.

We have no doubts that we could not have found a finer guide.” 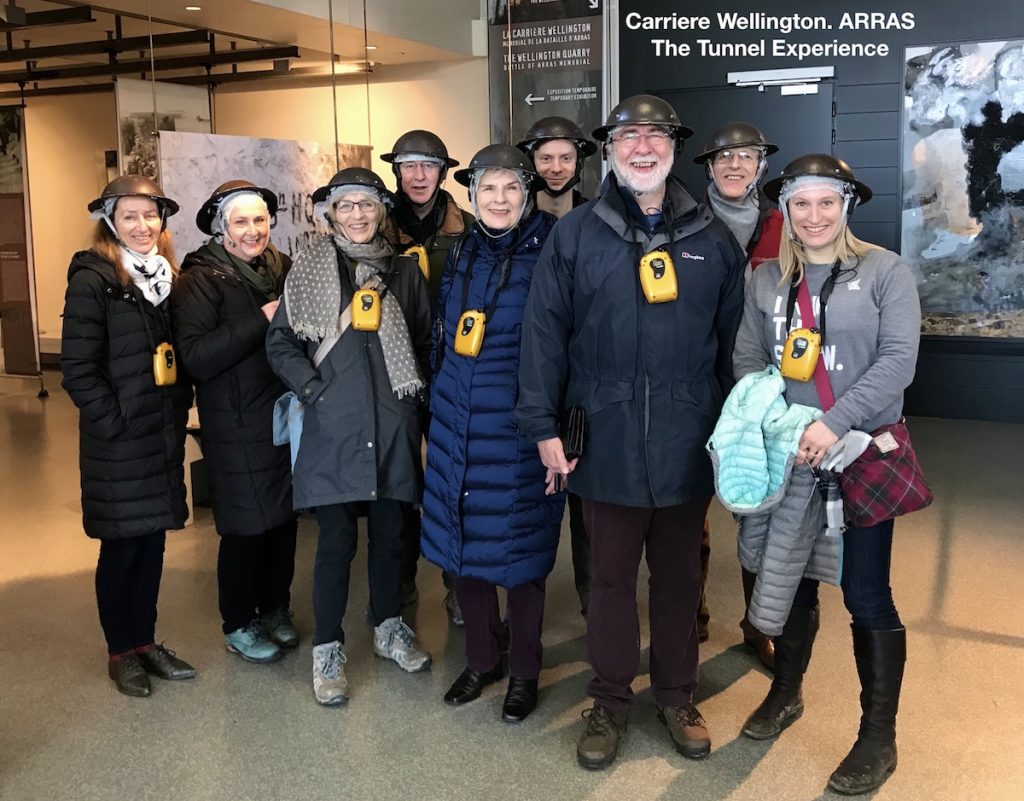 “I really do need to thank you for your support and guidance during the arrangement and expedition of our reminiscence trip to Arras and area. We had a very good time, despite the cold, and we have, absolutely, learned a great deal about the experience of our grandfather in 1918. It gave us all a proper perspective on the things he used to talk about, and quite frankly has deepened our respect for him and his colleagues in the 1st Gordons.

Many, many thanks again for all your help with a superb trip.”

With the British Army in the field. A Battlefield study from the Somme to Arras. 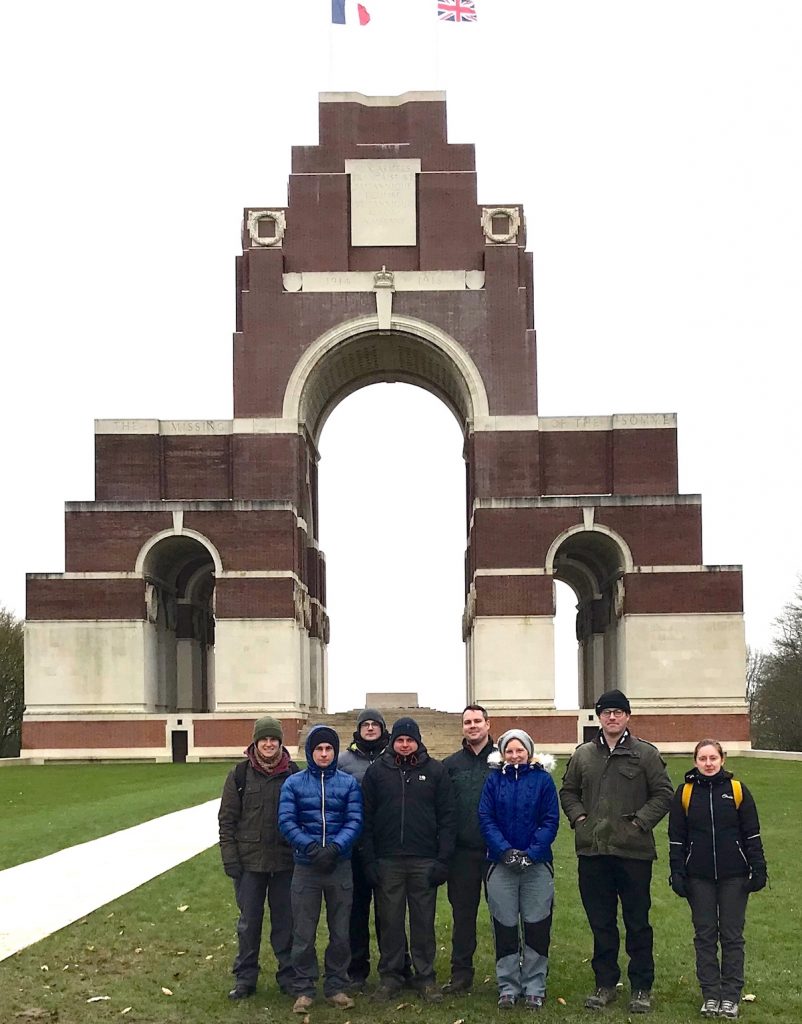 Jon is the most knowledgeable person I have ever met on this subject and provided us with an informative and knowledgeable tour. He is very different from normal tour guides as he has met a lot of soldiers who were there and knows their stories so instead of the generic “this happened here let’s move on” he could bring each part of the battlefield alive with personal stories from people who were actually there. He also knows of all the tiny cemeteries hidden away and why they are in such remote locations. The tour was able to be adapted to incorporate those who wished to visit the graves of relatives, which was an added bonus.

I would highly recommend Jon any day of the week to take you on a battlefield tour and help keep the memories of such a terrible war alive. 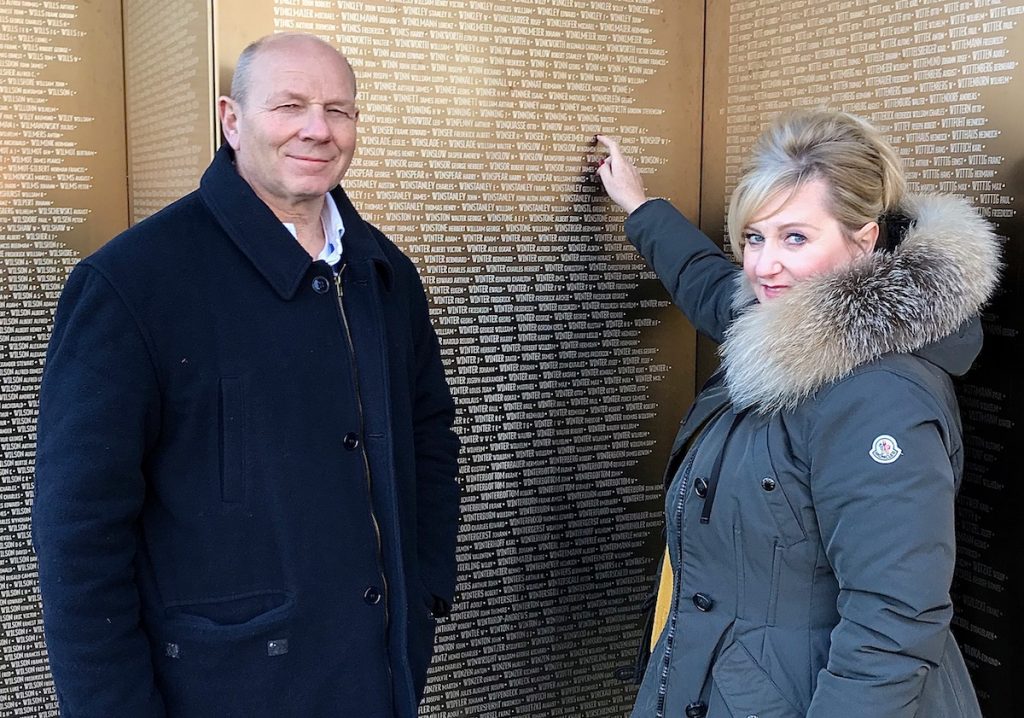 “He was never found. That was all I knew. I wanted to go and lay a wreath but where was Arras? How did I get there? I needed a Battlefield Guide. It was then I came across Jon Nicholls on the internet and what a find he turned out to be!

He took us to the Memorial at Arras where I laid my wreath. We also found his name on the memorial at Notre Dame de Lorette. Jon also took us to the field at Bullecourt where Robert fell and explained what his regiment had done. To say that was moving was an understatement. I will never forget that moment for the rest of my life. I will never be able to thank Jon enough for what he did. His knowledge of the Battlefields is enormous.

Jon was a fantastic guide who I recommend to everyone!”
Lesley Pickup
Manchester
January 2018.