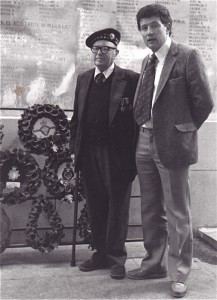 Jon says,
“I first went to Ypres with the Hampstead Pals in 1979. We took old soldier, Bill Hay, with us who had served at the 2nd and 3rd Battles of  Ypres with the Royal Scots. We stayed in the Hotel Joly at Armentieres, as Belgium was too expensive then. Crossing the border checkpoint every day was a chore, nevertheless the first stop was Hyde Park Corner and the grave of the 16 year old, Albert French, from Wolverton. ‘He shouldn’t have been there should he?’ said his niece, who I took back to his grave in 1989. Bill Hay wanted to go to Sanctuary Wood and he cried when he found the graves of his school chums. All Royal Scots, all from Edinburgh and all killed in April & May 1915 at the Second Battle of Ypres. He told me then he wanted his ashes to be brought back here and laid ‘among his youthful chums’. We duly obliged him in 1985, leaving him with his best friend Jocky Jack. I visit Bill’s ‘place’ every time I am on the Ypres Salient and I think about him every day. I wonder who will remember his place in the years to come?  I love Ypres, The Menin Gate and its 8pm ceremony, the Salient and the surrounding cemeteries. Tyne Cot Cemetery, with its 12,000 graves, row upon row, should be on every British person’s list to visit. An unforgettable experience. I learned a lot about Ypres Salient from my great pal, Tony Spagnoly with whom I had the good fortune to go, ‘pottering up the Menin Road’ many times in the nineties.  We covered all the ground from Gheluvelt Chateau and the bayonet charge of the Worcesters (1914) to Passchendaele church where Tony lit a candle in memory of the Canadians who finally took the ruins in 1917. He possessed an amazing knowledge of these ‘secret places’ of the Salient. I only wish that guy was still around to tell me more.  Ypres! The most sacred place of the British race.” 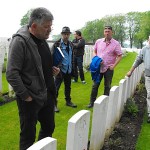 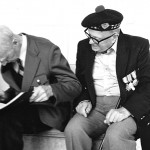 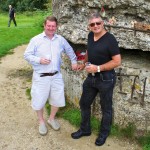 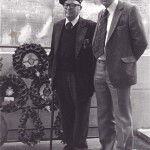 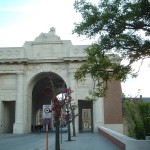 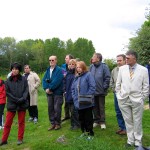 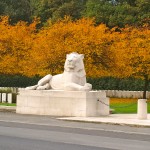 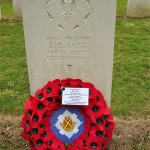 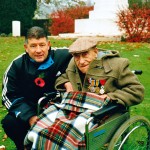 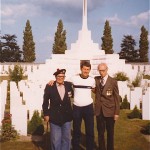